Abhay K.'s interview to The Hindu 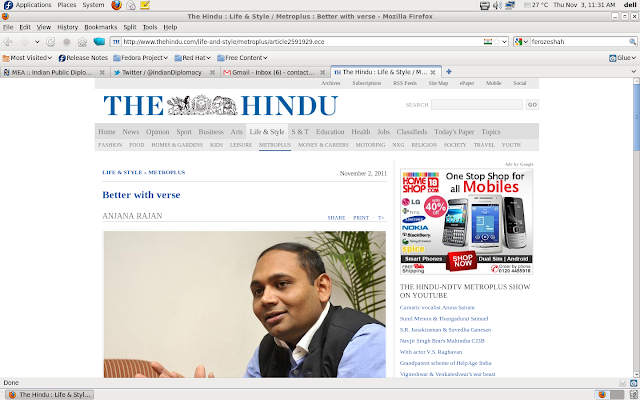 Abhay K.'s interview to The Hindu on the occasion of the release of his new poetry book Candling the Light


Poet Abhay K. whose latest anthology, “Candling the Light”, releases this Thursday tells Anjana Rajan of his vision for humanity
Shastri Bhawan, home to many government offices, is not what one associates with the stuff of poetry. Yes, one might think of it as the place where files moulder and dreams await fulfilment, sometimes for endless years. But a place where dreamers go daily and work for the betterment of society? Not quite the right use of words, one would object. Yet this is where you will find poet Abhay K., an Under Secretary in the Government of India's External Affairs Ministry. What's more, he sees no dichotomy between his job and his poet's vocation.


“A poet basically prepares the philosophical background or vision of a world order — a philosophical framework of how in future things could shape up. As a bureaucrat you implement that vision.”
He agrees at times there can be a wide gap between the two but not in his own case. If a diplomat's job is to “build bridges across countries,” as a poet he does that by visualising “a harmonious planetary society,” notes Abhay K., whose office door carries the less remarkable name of Abhay Kumar. “So for me, being a poet and doing my job are in tune.”
Abhay K.'s book of poems, “Candling the Light” (Yash Publications) launches this Thursday in New Delhi. In the slim volume he recalls how he surprised himself on his first visit to Moscow — where he was sent to specialise in Russian — by responding to the beautiful city with spontaneous poetry. “You remember how Valmiki wrote the Ramayana when he saw a bird hurt? For me something happened in Moscow.... The word flow was unstoppable. Maybe (the experience of) a new country, a different civilisation, opened up something in me.”
Still, something latent must have driven him to write poems rather than effusive prose!
“My father was a teacher. We had lots and lots of books at home,” he recounts. “I ended up reading so much as a child.”
Besides the poetry of Ramdhari Singh ‘Dinkar', Kabir and others, his mind was opened up by stories narrated by his grandmother: Panchatantra and other classics. “I grew up inculcating what was the essence of Indian literature.”
Thus enriched, Abhay, growing up in Nalanda, Bihar, studied in Hindi medium till class X. Then how come his poetry didn't spontaneously flow in his mother tongue?
“Yes my mother tongue is Hindi,” he agrees. “I can write in Hindi, but I consciously don't. I am comfortable in both languages but English is the language of global reach. Ultimately you write to be read.”
And while admitting that his favourite writers are Indian ones, though he has studied English writers too, and conceding that poetry “has a special flow when you express it in the mother tongue,” Abhay yet hesitates since he has become more comfortable with English. “Literary Hindi is much more difficult than literary English,” he feels.
The point could be debated, but Abhay comes to the issue at the heart of his writing, and the one that seamlessly unifies his existence as a diplomat and a poet. He targets those readers for whom English is the second language. “…who want to find something across the borders.”
Dedicating his book to “our common humanity”, he notes, “I write for an audience very consciously which is not from my birthplace. Neither do I write for people in the U.K. or U.S.”
The concept of a common humanity is more tangible now than ever before, thanks to the Internet. English speaking youngsters in Chennai today would have more in common with youngsters in Cairo than with their own non-English speaking compatriots, he remarks.
Recognising this “tremendous change and the kind of literature they consume — this is for them,” says the poet, who is inspired by Kabir because of his universal vision couched in minimalist verse and also by Tagore — “not just because of his poems but because of his liberal outlook”.
If Tagore spoke of liberating humanity from the walls we build around ourselves, says Abhay, “I want to take a step forward from Tagore. Humanism is about humanity but there are billions of other species…How long we survive depends on how we care for other living and non-living species.”
Also a painter, Abhay, has written five books of prose and poetry before this. And next, he reveals, “Í am writing a poetry book on Delhi. Delhi has a seduction of its own.”