Release of SAARC Song written by Abhay K in Nepal 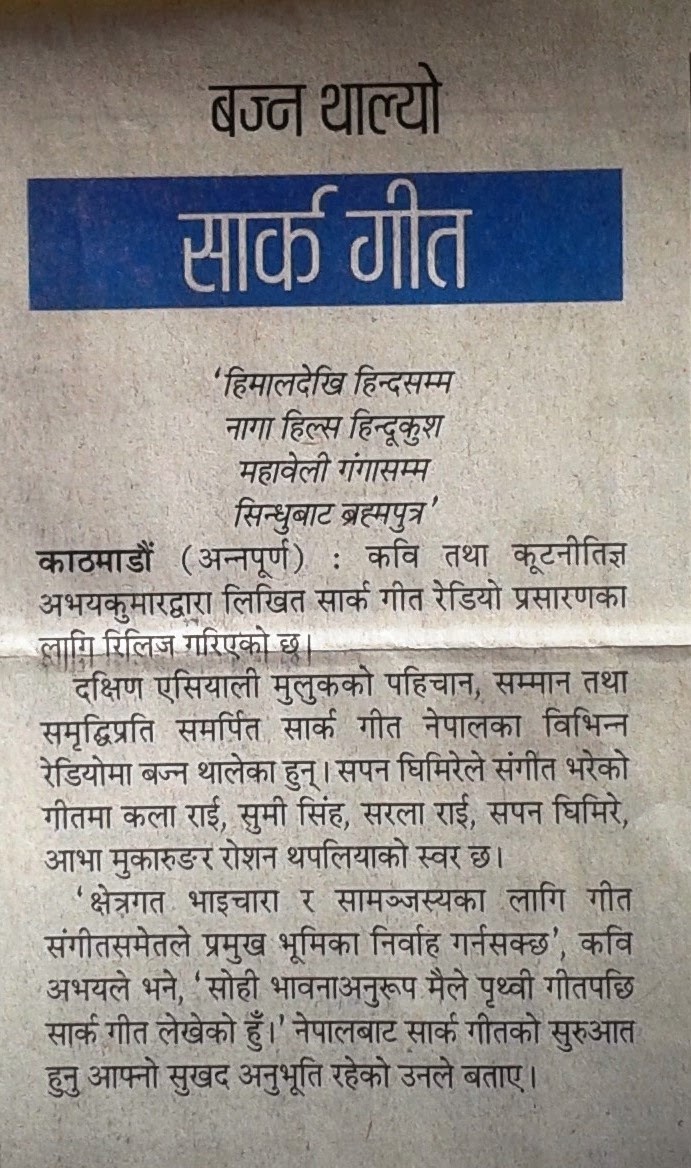 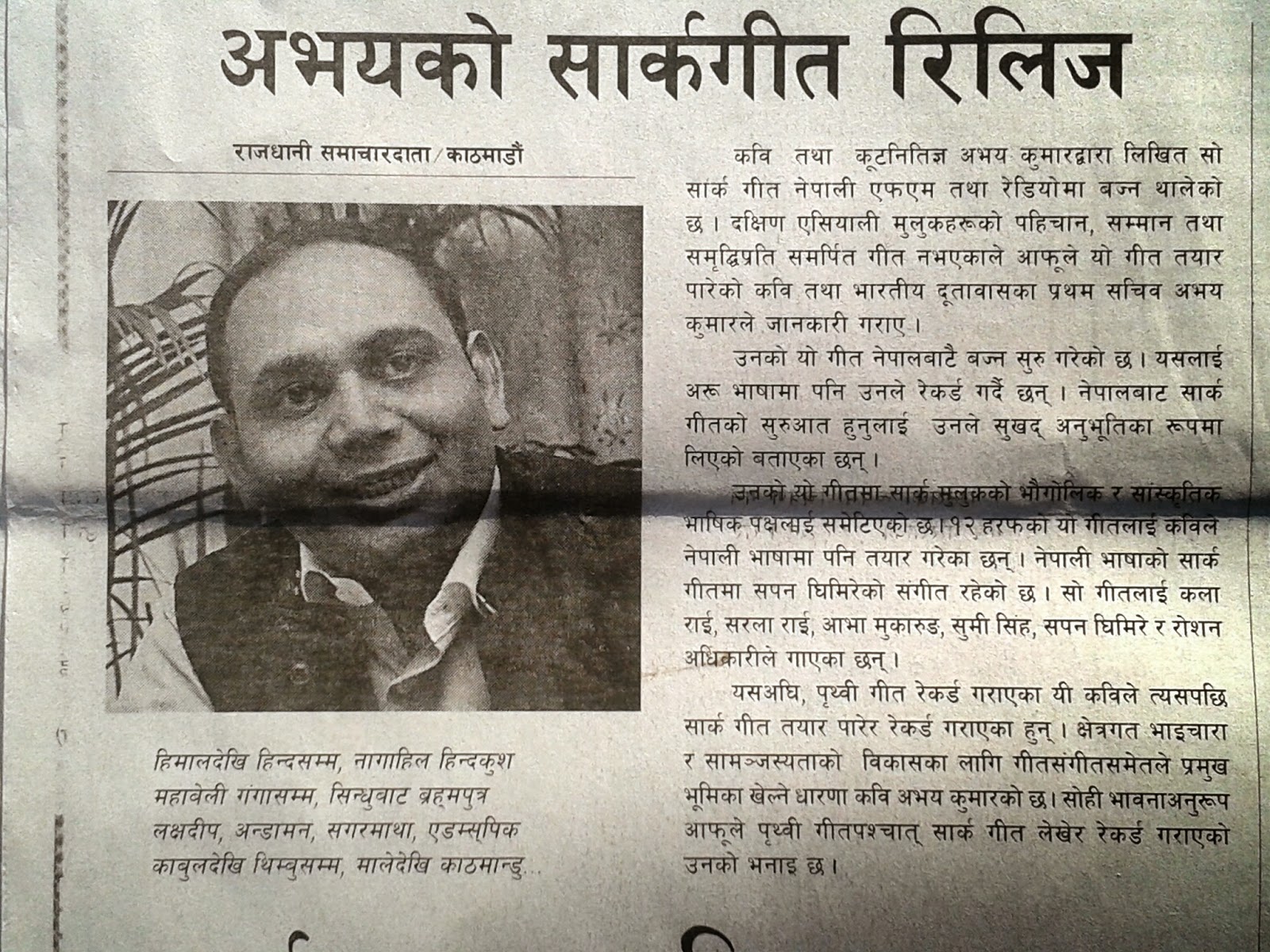 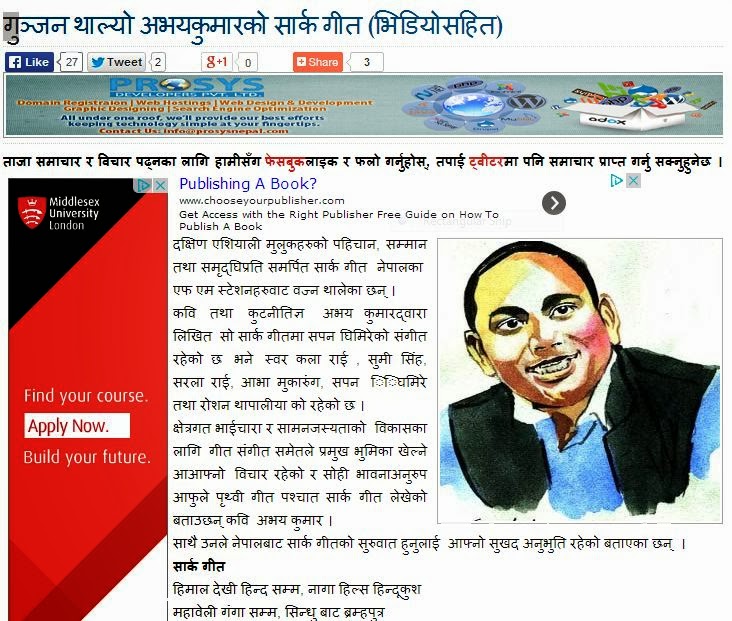 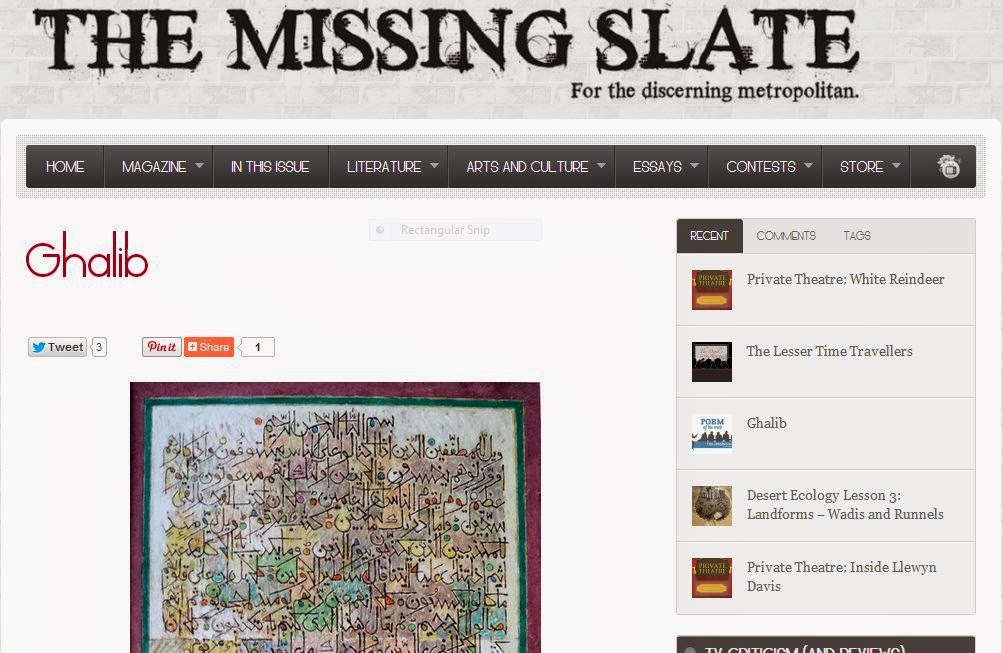 Ghalib by Abhay K.
No comments: 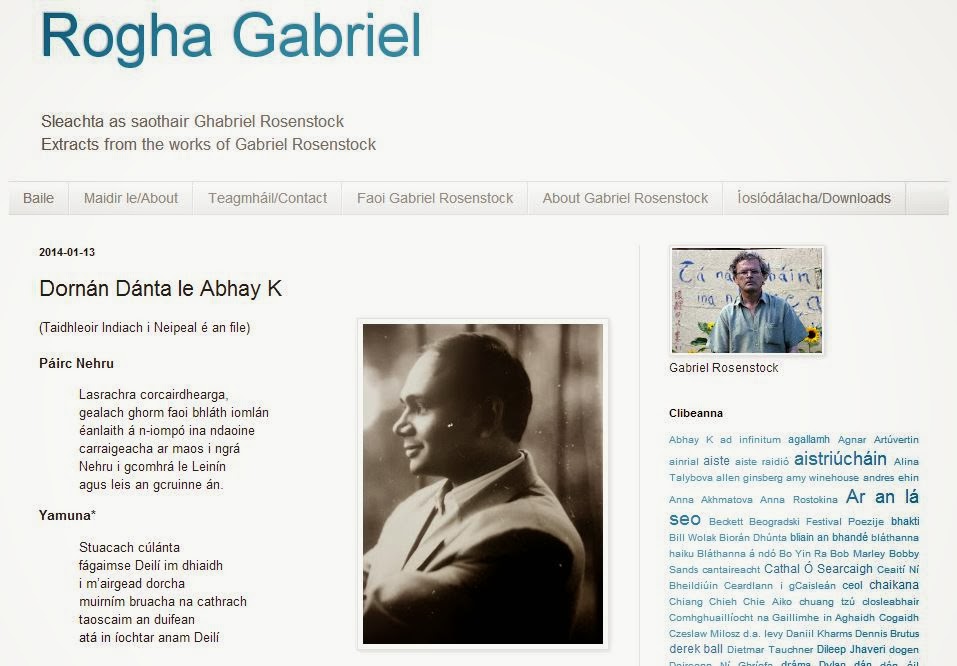 Translated Poems of Abhay K in Irish by Gabriel Rosenstock
No comments:

Who Are Diplomats? by Ivo Andric

(translated into English by Celia Hawkesworth)

It seems to me that there are more "failed people" in the diplomatic service of every country, than in any other profession, people who have stumbled through the wrong door and now no one can escort them out and they themselves cannot find the exit and go back. In other walks of life such a "lost" person is unnoticed, he sings in the choir which he does not help but nor does he harm it, so his voice and his ear cannot be appraised. In the diplomatic service circumstances oblige the majority of people sooner or later to act independently, to show who they are and what they can do.

I have not read much that has been written about the diplomatic profession, but everything I have read has seemed to me superficial and inadequate. And I would find it very difficult to have to give a specific definition and describe the basic characteristics of this calling. I could only say something about it in a negative way. And only on the basis of experience.

It is not only that diplomacy "is not for everyone", but one can say unreservedly that only a small number of people really have the gift and vocation for this work. It is, of course, far harder to say what those people are like and what they ought to be like. But, let us try.

They are people of sound but straightforward intelligence, people of simplified and limited sensitivity and a cool heart, but not without heart or any sensitivity; capable of deception, but not closed and mysterious, still less underhand; strong, but not rough; quick and decisive, but not hasty or impulsive; realistic, sober, but not dry and dull.

They need to know a certain amount, but there should be no trace of erudition or pedantry in what they know, and their knowledge should agreeably surprise and perhaps impress those with whom they are speaking, but never embarrass, offend or shame them.

It is the same with their courage: they need to have it, and it should be sound and reliable, but they should display it only in extreme circumstances and bear it as they bear arms which everyone knows they have, but are never seen.
They must also have imagination, but only in a certain degree, enough for a man to see every issue from every point of view and with all its possibilities and immediate consequences; anything more than that is both dangerous for them and damaging to the work they are doing.

Who could confirm and list everything that those who wish to devote themselves to this service ought to be?
They should be versatile and straightforward. Not arrogant, but naturally self-assured, even at times proud; they should not despise small details (never, in any circumstances!) but they should know how to stay somewhere on the borderline of pettiness and pedantry; they should be conscientious in everything, but without excessive zeal; value the moment and always make use of it, but also know how to leave time to have its effect; they should have many, varied interests in people, objects, art, games and entertainments, but not surrender themselves to passion or the intimacy in which a man completely forgets himself; they should be a bit human, and never inhuman; ready for everything and capable of anything, but not heartless or monsters.

That means, in effect: living constantly on two levels, the personal, human one and the official, inhuman one, but never in any way showing or betraying to anyone on which level you are at any given moment, or better still: not yourself being completely aware of it, which is the surest way of not betraying yourself.

In a word, you need to be a person of a particular kind without appearing to be, but always and in everything to give the impression of an ordinary, average man. You need to have a hundred abilities, but strictly controlled in many different ways. In general one could say of people of this kind that their ability lies more in a good and proper balance between different qualities than in the value of those qualities themselves. So that, roughly speaking, while each of those qualities is average, the whole that they constitute should be original and above average.
There is much else besides that one should be—and not be—in this profession. Everything that has been said about it and which could still be said may be more or less accurate, but it would be mistaken to think that this would be sufficient or that it is something that can be defined briefly and simply, once and for all, for everyone. But one thing is certain: if an individual does not have at least some of the main qualities listed even residually in his temperament, character and upbringing and is not capable of developing them and applying them in a practical way in the course of his work—it would be better for such a person never to enter the profession.

However, it is just the kind of profession that has external, brilliant facets which both attract and deceive people. For this reason it contains, more than any other profession, people who have stumbled through the wrong door. That is a great misfortune both for the service and for themselves. A mistake in the choice of vocation is paid for in all professions, but nowhere so dearly as in the diplomatic service. Whoever does not pass the test demanded of him by the profession will become a comic and pathetic figure in a service for which he is not suited but from which he cannot free himself, a wreck which carries on floating for a long time. That poisons the life and undermines the soul and creates wretches of a particular kind. This unusual and unusually difficult profession, which, in the most auspicious circumstances, drains and deforms people, can turn them into misanthropic misfits and potential suicides.

That is how the matter looks schematically, but of course this scheme is somewhat artificial and even within it there are not many striking instances of either successful or unsuccessful diplomats, while there is a whole scale of those who move between those two extremes. Half-successful, quarter-successful. Those who after their first failures had the strength or the skill or the luck not to sink, but to find their place. And the opposite, those who had a brilliant beginning, but did not manage to retain their place and now live from their previous glory and wait in the shadows of a humbler position for a better opportunity which fails to appear.

And all this seethes and shifts in a constant race and competition for success and recognition, in fear of professional misfortune, envy and accident which may lie round the corner. For in this service, which appears more uniform and rigid than any other, there is nothing constant or certain: a person moves as though through a mist in which the light which glimmers intermittently bewilders and deceives the eyes more than it shows the path and enables a person to find his way.