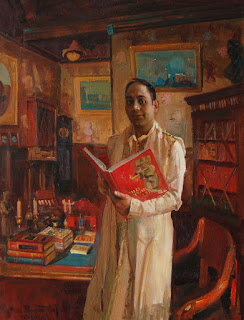 The Young Voice And The Poetry Of Eternity 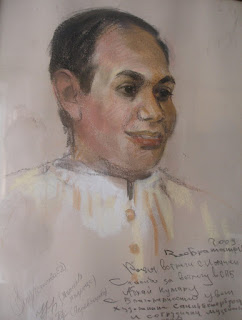 I met the poet and diplomat Abhay Kumar on 7th of May – a very significant day for Indian literature, Rabindranath Tagore's birthday. Even though Rabindranath Tagore was born over a hundred years ago, in 1861, all the lovers and admirers of the Indian literature consider this day to be very special. So special in fact that festivals and conferences are held, on this day not only in India, but all over the world, where people read and love Indian literature. Moreover, this day can be an opening or a culmination for some novel. On 7th May 2006 this festival of literature was celebrated at the Cultural Centre of the Indian Embassy in Moscow. There were a number of speakers that day and I was invited to talk about the connections between the Indian and Russian literature. This is a vast, captivating and varied subject, and among multiple examples of the close bond and intertwining of our literatures I remembered «The Namesake», an English novel by Jhumpa Lahiri. The main hero of the novel, a Bengali, is called Gogol. He lives in a modern globalized world with his wonderful name, the name that was given to him for the time being by his parents, but instead became his destiny. And I mentioned that in my view one of the main goals of this literary namesake of Gogol is to remain faithful to one's national roots, when by the will of fate you were born and live far away from the native lands of your forefathers. Paradoxical, but the best way to save this faith and understand your own national identity is through the name of the Great Russian writer. And this was how I came to know Abhay Kumar. Indians call such meetings «Samyog», a lucky coincidence. It turned out that Abhay knew and loved this novel, besides he was a JNU alumnus. Not long before thisliterary meeting with the young diplomat, I had returned from Delhi, where I was researching the latest modern Hindi literature in JNU under an international exchange program. I was even more surprised when I found out, what the talented poet and writer, Abhay, who is not much older than my students studying Hindi and Indian literature, was writing about. During that time he was finishing his novel «From River Valley to Silicon Valley». The problems of connections and intertwining and the attraction and repulsion of various cultures and characters interested him greatly.

In the book «Fallen Leaves of Autumn» the love of the spoken word and the admiration for the marvellous and unfathomable nature coexist with the urge to capture the moment harmoniously be it through word , brush, digital camera or internet. But the most valuable thing about this book, in my view, is the higher feeling of human dignity before the incomprehensible universe and the aspiration to share with the near and dear ones, what you cherish the most.