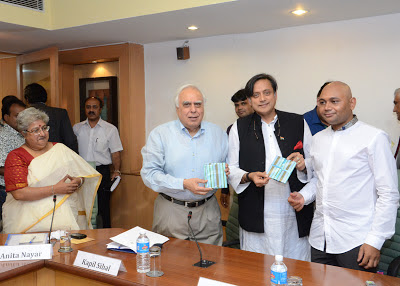 Shri Kapil Sibal, my senior colleague on the Council of Ministers, as Minister for Communications and Information Technology, and Minister for Law and Justice,

Distinguished members of the audience, ladies and gentlemen, friends,

It is my pleasure to join you, at the behest of the Indian, Council of Cultural Relations (ICCR), at the Launch of this unique Anthem for Earth. Abhay, when he wrote to me about this initiative,described the need for such an anthem – to pay tribute to our planet, to remind ourselves of our responsibilities as global citizens, and (in conjunction with the many other anthems we sing) to remember that we have a supra-national loyalty alongside the claims of our nation, our state, or our favourite football team.

It is, when you think about it, a simple and elegant idea.We live in an increasingly interconnected world. Whether it is the advent of technology bringing us together, or the common challenges imposed by climate change, a global consciousness has certainly begun to emerge. To tap into this nascent consciousness and give it form and focus, we need to establish a common language and common icons. In time, then, emerging
generations of global citizens would come to rally around these, in realising their debt to and in paying tribute to the planet that sustains us all. What better icon, then, than our planet itself, and what more universal language than music!


So this notion – of finding a rallying point for a global consciousness of Unity in Diversity – is one which will find particular resonance in India as ICCR celebrates. We are, after all, an ongoing and highly successful form of coexistence that encompasses exceptional diversity woven with loyalty to a higher set of ideals, and in doing so finds a unity of thought and purpose that surpasses all our differences. We are, if you will, one model for the kind of unity that would one day seem an Earth Anthem shared and sung by all the peoples of the world.


In fact I remember quoting Winston Churchill's nasty comments that "India is merely a geographical expression. It is no more a single country than the Equator." Churchill was rarely right about India, this was no exception but Abhay has come up with an anthem for the equator and the planet, that is incredible, for that Abhay, I congratulate you.

There was an illustrious attempt before this  and that was no less than a figure than the poet W.H. Auden who wrote a “Hymn to the United Nations” and also attempting a hymn to the world which then Secretary-General U Thant hoped would become the de facto anthem of the UN but it didn't. But even if the UN might have done that, it was hardly ever played. As we release Abhay's new paean to humanity and our home, the Earth, it might be worth recalling words of Auden's famous lyrics, his hopes for humanity: and this was the UN anthem he wrote-

“Our several voices
Interblending,
Playfully contending,
Not interfering
But co-inhering,
For all within
The cincture of the sound
Is holy ground,
Where all are Brothers,
None faceless Others."

You walk in illustrious footsteps Abhay, I am delighted that you have in the shape of Kapil, a distinguished poet himself, to do this release, I am very privileged to be part of this very special occasion. I wish you, this anthem and ICCR, all the very best, Jai Hind.